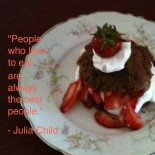 Mojito to start? Don’t do it! The first one had some tiny bits of chopped mint but there were none to be found in the second. The first one was okay, the second was awful. No mint, some strange mixer giving it a milky look and sweet.

We sampled the prosciutto deviled eggs. These were a nice deviled egg but they over-crisped the prosciutto; it was chopped into tiny pieces and fried until hard. It was rather like tiny pebbles. To accompany the eggs, we had the crusty bread with olive oil and balsamic. The bread was good, the balsamic was thick and sweet, but the olive oil was hard to find. It would have been good to have more olive oil to balance the generous drizzle of balsamic.

The next course was pork belly nachos. While an interesting twist on the nacho idea, these had several short comings. The chips were tasty, thick and had a great texture but, they varied in shape. The partial rounds were great but the long strips did not work well for nachos. The cheese sauce was like a canned nacho cheese but at least there was enough of it. While there was a generous amount of pork belly, it could have been cooked better; pork belly really only works when it is crispy and this was not. As for the remainder of the toppings, they tasted fine but they were scarce. I found very few black beans and there were a couple of tablespoons each of sour cream, guacamole, and pico de gallo. A good idea that needs work.

Not really a keeper but I like some of their ideas so I try it periodically.

This entry was posted on June 4, 2016 by luvsfood in Arizona, Scottsdale.